One of the most accessible ski resorts, South Peak is just a 2-hour drive from greater Boston and Logan International Airport. Once you’ve arrived and settled in, you’re ready to experience some of the best New England has to offer. South Peak homeowners and guests enjoy open and easy access to local amenities and attractions, including the scenic Pemi River and nearby Lincoln’s sprawling Main Street laden with shopping and dining options for the whole family.

Skiing enthusiasts looking to hit the slopes this winter need not look further. Located in the beautiful White Mountains of New Hampshire, Loon Mountain is home to trails catered to skiers of all skill levels, Whether you’re just learning the ropes or a seasoned veteran, there’s a ski trail waiting for you at South Peak Resort.

One of the most popular spots at South Peak is the South Peak Base Camp, which offers a convenient central location for skiers to gear up and start their day on the mountain. From here, guests and residents alike can easily access the Lincoln Express Quad Chairlift, which takes them up to the top of South Peak.

As the fastest-growing ski resort in the East, we have expansion plans into 2023 and beyond. In addition to developing numerous single-family home and townhome ownership opportunities, Loon Mountain provides residents with new trails, lifts, equipment upgrades, and amenities each season. The South Peak expansion to be completed for the 2023 season will include a new, state-of-the-art chairlift, facilities dedicated to ski/snowboard education, an additional 30+ acres of trail development, and the installation of best-in-class snowmaking technology. 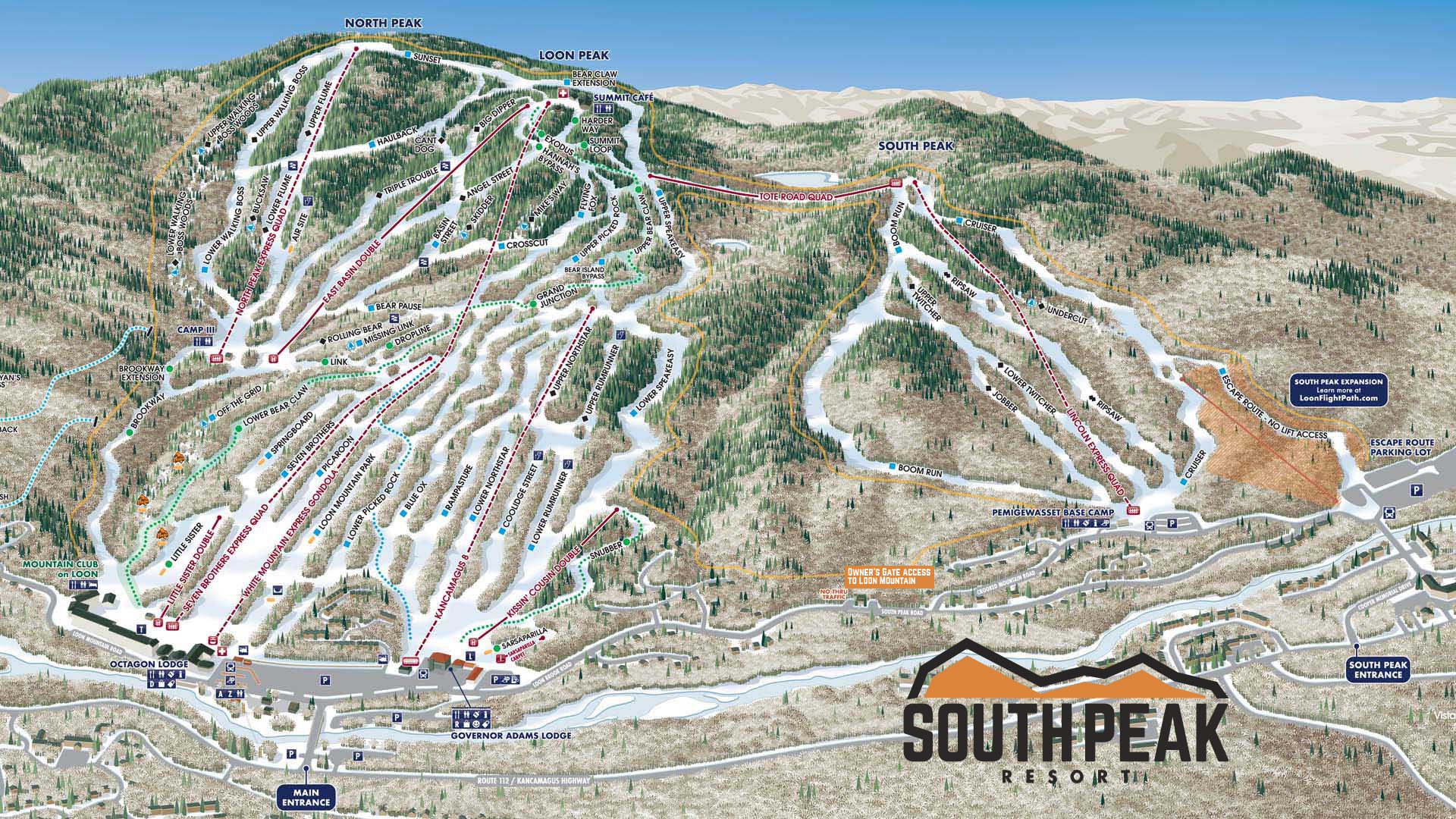 When you need a break from skiing in your own backyard. South Peak Resort’s location is conveniently located in the heart of the Western White Mountains, with two additional ski resorts within minutes of your home. If you’re an avid, experienced skier or snowboarder trying to challenge yourself or if you’re just starting out and need to take it slow, there’s a trail waiting for you less than an hour away from your South Peak home base.

Bretton Woods – A 36-minute ride from South Peak and you will find yourself at New Hampshire’s largest ski area with 464 acres of skiing and snowboarding on 63 trails, 35 glades, ten lifts (including an eight-passenger gondola, four high-speed quads), four terrain parks and snowmaking coverage on 92% of the property. Those with a sweet tooth will be happy to hear there’s a candy store at the top of the mountain, along with various other activities for children and those less inclined to the skiing/snowboarding scene. Bretton was recently named in the Top Resorts Five in the East for family programs.

Cannon Mountain – Just 10 miles from Lincoln in Franconia Notch State Park and steeped with a rich history, Cannon features New Hampshire’s only aerial tram, the largest vertical drop (2,330 feet), 285 skiable acres on two peaks, 97 trails, and glades, 11 lifts, and 192 acres of snowmaking. Cannon features challenging but rewarding terrain for hardcore skiers and boarders with few other activities off the mountain.

It’s not hard to see why South Peak is one of the fastest-growing ski resorts in the country, and the future holds even more excitement and opportunity. Whether you’re an expert skier, or you just bought your first pair of skis, or even if you just need a relaxing weekend up in the picturesque White Mountains, South Peak has something for everyone.